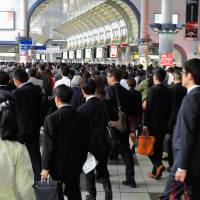 The Japanese workforce in 2040 is projected to be 20% smaller than in 2017 due to overall population decline if the economy sees no growth and women and the elderly continue to have difficulty landing jobs, according to government study released Tuesday.

A study group of the labour ministry, releasing the first official projection for the size of Japan’s workforce in 2040, called for…..